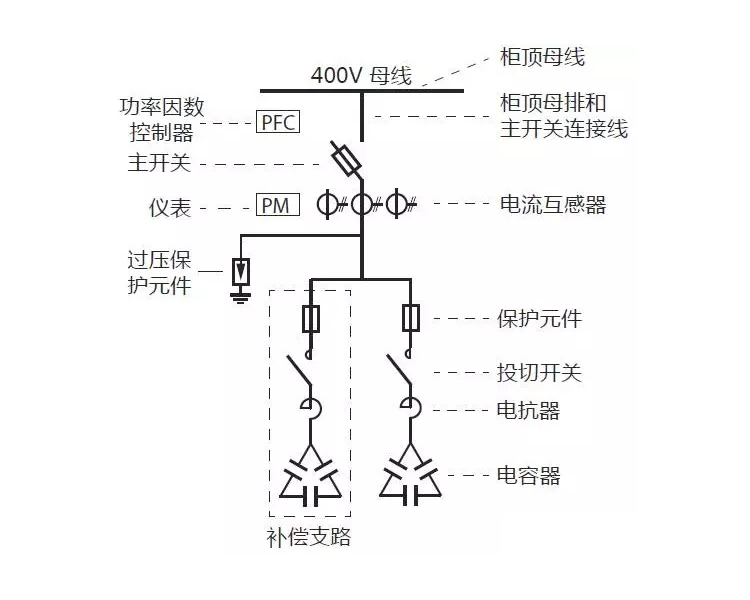 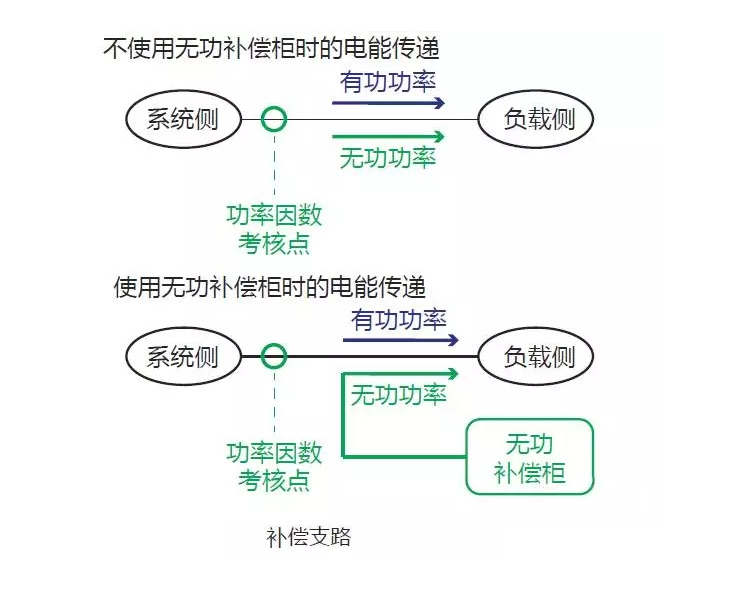 As a complete set of equipment, the reactive power compensation cabinet consists of the cabinet and the components in the cabinet. It mainly includes the following elements:

1) main switch
2) overvoltage protection element
3) protection components
4) switch off switch
5) reactor
6) capacitor
7) controller
B. master switch
Every reactive compensation cabinet, as an independent device, has a main switch to connect the compensation device to the bus. At the same time, it plays a protective role in the short circuit fault in this cabinet.
The main switch is often used as a fuse switch or a circuit breaker.

D. protection element
It protects the components and faults on the compensation branch.
The protective components on the branch are often used as fuses, and the parameters need to be matched with the capacitor on the branch.

The function of the switch is to connect the capacitor and reactor on the compensation branch to the system or to exit the component of the system.
The capacitance reactance is connected to the system, that is, the constant input of the capacitor; the capacitance reactance is removed from the system, that is, the commonly said capacitor is excised.
PS: when capacitors are put into operation, there is inrush current, which is the basic characteristic of capacitor input. Therefore, switching switch has another function, which is to reduce the inrush current of capacitors.
The common capacitor switching switches are:
Capacitor special contactor
Thyristor switch
Composite switch

Capacitor special contactor
Remember, it must be a special capacitor.
The contactor of the capacitor is more than one pair of contacts of the conventional contactor, and the resistance value in the circuit is larger than that in the loop, leading to the reduction of the inrush current of the capacitor.
Advantages: less fever during operation
Shortcomings: Although the capacitor inrush is effectively limited, the flow value is still larger. 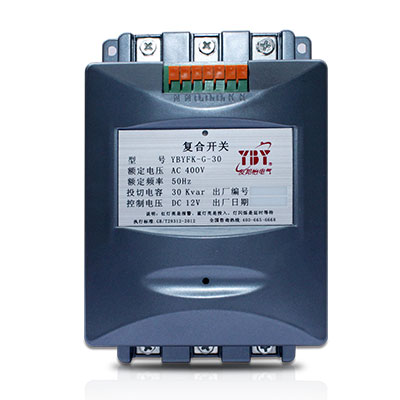 A composite switch is a product that combines the advantages of a thyristor switch and a contactor, which is composed of a thyristor and a mechanical contact.
The switching of capacitors is accomplished by thyristor, which ensures the zero crossing switching of capacitors. After the capacitor is put into operation, the mechanical contact is used as the conduction circuit to avoid the heat generated by the thyristor for long term operation. 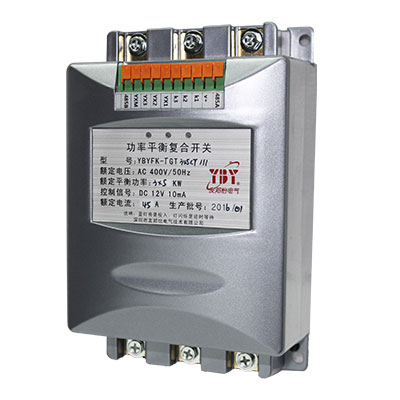 The reactor is the companion of the capacitor, which has appeared together in many times. As an important component in the reactive power compensation cabinet, it must be understood.
The reactor has two main functions:
1. suppression of capacitor inrush
2. suppression harmonics
To know the appearance of a common reactor, see the picture below.
Our common reactor has two types of wire wound and foil.
According to the different material, the wire wound reactor has copper wire and aluminum wire, and the same reason, there are two kinds of copper foil and aluminum foil.
Reactors are usually protected by over temperature. They have a pair of contacts (usually closed much). When the reactor is over heated, the contacts are open, which can be used to remove the reactor from the system.
The parameters often described by the reactor are "reactance".
The reactor that is specially used to suppress the flow of capacitors is not more than 1%.
The reactance rate is based on the number of main harmonics in the system. For example: to suppress the influence of the 5 and 7 harmonics, the common 5.6%, 6%, 7% reactance rates, the 3 harmonic suppression, and the common 12%, 13%, 14% reactance rates. The main components of the reactive power compensation cabinet. Because of the existence of capacitors, the reactive power compensation cabinet is often called "capacitor cabinet".
In the low pressure system, our common capacitors are self-healing capacitors (made of metallized films).
Dry capacitor
According to the difference in the internal filling agent of the capacitor, several kinds of different kinds can be divided. For example, we often hear the word "dry capacitor".
Oil immersed capacitor, as the name implies that filling agent is liquid, the defect of liquid is leakage risk, and oil is flammable.
The dry capacitor has solved the above disadvantages of the oil immersed capacitor, which is usually filled with filled resin and inert gas.
Shape and installation
There are many shapes and sizes of capacitors, such as oval, circular, square and so on.
Different configurations determine the different installation methods.
Capacitor terminal
Wiring terminals are common with screw and European terminals, such as drawings.
Screw connection, the contact area is big, the connection is firm. The wiring column is exposed to the outside, usually with a protective cover.
European terminal with exquisite structure and small contact area. When the most common fault occurs, the terminal terminal is loose, and the contact point heat causes the terminal to burn out.
Explosion-proof device
In order to prevent the explosion of capacitors, explosion-proof devices are usually installed.
Discharge resistance
The capacitor itself is a energy storage element. When the capacitor is out of operation, its own charge needs to be released, and the discharge resistance is used to complete the capacitor. The discharge resistance can be built outside and can be built in. The discharge voltage is required below 75V within the prescribed time.
More about capacitor knowledge, please pay attention to the other content of the micro signal "Zheng ER technology". 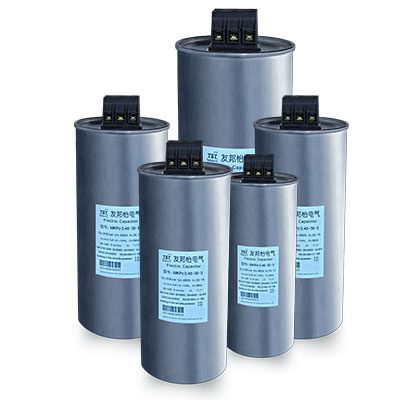 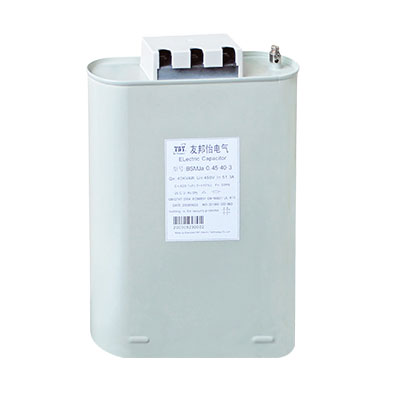 The power factor controller is the control center of the reactive power compensation cabinet, and it is the core of the automatic switching of the compensator (compensation branch). 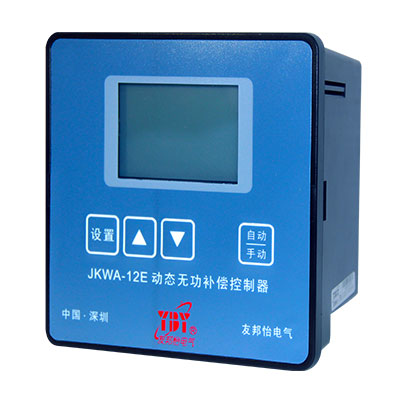 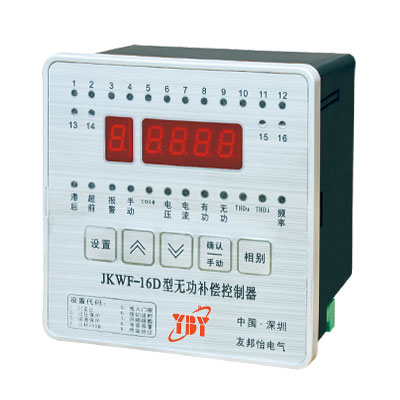 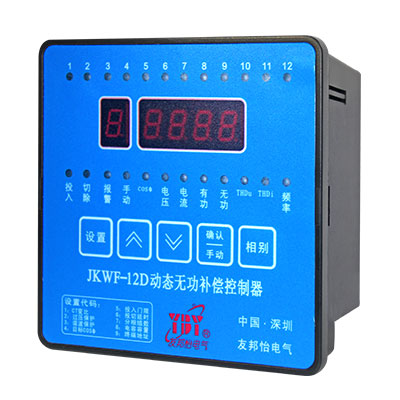 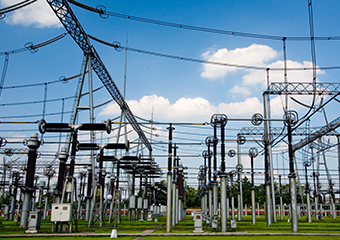 Why do we use alternating current, not DC?